M left and right side decal , stripes (all 12ml)

Click on the picture below to watch the trailer 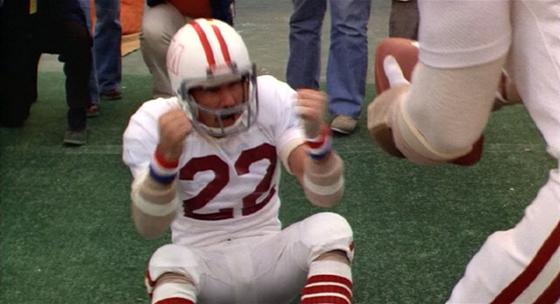 Wide receiver Marvin "Shake" Tiller and running back Billy Clyde Puckett are football buddies who play for a Miami pro team owned by Big Ed Bookman (Preston).[3] Bookman's daughter Barbara Jane is roommates with both men, and the film depicts a subtle love triangle relationship between Barbara Jane and her two friends.[4][5] She initially has romantic feelings for Shake, who has become more self-confident after taking self-improvement training from seminar leader Friedrich Bismark.[6][7] The program is called Bismark Earthwalk Action Training, or B.E.A.T. After Shake completes his course, he and Barbara Jane sleep together and start a relationship. Barbara Jane is not a follower of B.E.A.T., and Shake is warned by his leader Bismark that "mixed marriages don't work."[8]

Barbara Jane is determined to make it work, so she attends B.E.A.T. in an effort to "get it."[8] At the end of the training session, she is worn out from Bismark's "sadistic abuse, pious drivel and sheer double talk."[8] Barbara Jane also feels guilty that she did not "get it." Shake is insistent that the training has had proven results for him, noting that he has not dropped a football pass since completing B.E.A.T.[8] Billy Clyde also has feelings for Barbara Jane and enrolls in B.E.A.T. in order to understand what she is going through.[9] In the training, Billy Clyde is shown coping with the seminar rules forbidding going to the bathroom.[10] For a time Puckett pretends he underwent a conversion to Bismark's way of thinking. While Barbara Jane and Shake are at the altar about to be married, the minister turns to Bismark and gives him some advice on how he can avoid capital gains tax in his business.[8] Billy Clyde ends up exposing the movement's shallow side, and rescues Barbara Jane from both B.E.A.T. and her impending marriage to Shake. After leaving the wedding together, Barbara Jane and Billy Clyde reveal their feelings for each other.[4][9]